If you spend $75 or more, ground shipping is free! 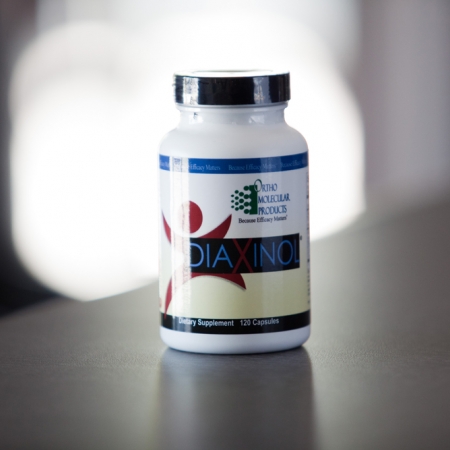 Diaxinol is a nutrient and herbal based diabetes support product. Great for use in controlled blood sugar levels in combination with a whole foods diet and regular intense exercise (like interval training).

SUGGESTED USE: As a dietary supplement, 1 capsule two times per day or as recommended by your health care professional. Diaxinol may cause nausea and gastrointestinal disturbances. Do not exceed the recommended dosage. Do not take if you are pregnant or nursing.

Biotin is an essential B vitamin, meaning humans cannot make their own biotin; therefore, it must be ingested through the diet. Biotin has often been overlooked in the support of healthy blood glucose levels. Biotin has been found to enhance insulin sensitivity and improve glucose and insulin tolerances.

Chromium is a key constituent in the molecule known as glucose tolerance factor (GTF). GTF facilitates the uptake of glucose into cells in conjunction with insulin. Research has concluded that non-insulin dependent diabetic patients have a compromised chromium status, when compared to healthy controls. Gymnema sylvestre is a woody plant that grows in India. Its beneficial properties are thought to reside in a group of compounds called gymnemic acids.

Gymnema extracts are associated with increased pancreatic function and insulin release. Lipoic acid, once known as thioctic acid, is considered one of the most versatile antioxidants. Lipoic acid is able to recharge the antioxidants vitamin e, ascorbic acid, and glutathione. Lipoic acid modulates glucose and insulin sensitivities. It also acts as an antioxidant, decreasing oxidative stress, the main stimulus for diabetic complications. Vanadium has been found to have insulin mimetic properties. It has been used clinically to help manage serum glucose levels. Cinnamon is widely used for glucose support. The constituents known to give cinnamon its glucose supporting activity are called Type A polymers. In human studies cinnamon has been shown to lower blood sugar and improve insulin resistance. Studies have also found improvements in fasting blood sugar levels after cinnamon supplementation.